Liam Kelly ‘At Home with McKenna’

HomeLiam Kelly ‘At Home with McKenna’

1Liam Kelly ‘At home with McKenna’ 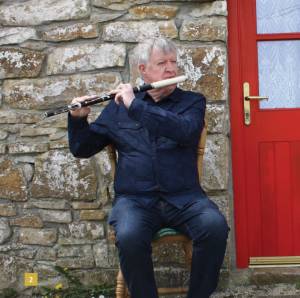 This unique album At home with McKenna was recorded by Liam Kelly in John McKenna’s homestead on Tents Mountain, Tarmon, close to the village of Drumkeeran in North Leitrim. Liam is playing John McKenna’s original Concert ‘D’ flute accompanied by Kevin Brehony on piano. Both house and flute have been restored by the McKenna Society in recent years.

This album was an opportunity not to missed for The John McKenna Society. It was clear from the outset when Liam played McKenna’s flute for the first time at a local McKenna session in Drumkeeran that the flute was in good hands. It was as if mutual respect was evident between musician and instrument.

Liam Kelly grew up in Sligo Town and is a founding member of Ireland’s internationally renowned and award-winning traditional band Dervish. In a career spannng 31 years, which they celebrated in 2020, Dervish have produced 14 albums and have toured worldwide. Liam has also recorded a solo album Sweetwood as well as a duet album Sets in Stone with Sligo Fiddler Philip Duffy. 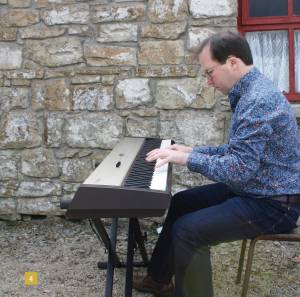 Kevin Brehony who hails from Calstlebaldwin, County Sligo has a long-standing empathy and a deep-rooted understanding of McKenna’s music. Kevin was first introduced to the music of John McKenna in the 1990s and has been involved with traditional music in the area ever since. Kevin has featured on many acclaimed recordings associated with the music of Sligo and Leitrim.

While the album is available as a CD and download, we are proud to also have produced a vinyl edition as a nod to the wonderful 78s recorded by McKenna in the early 1900s in New York, critically important recordings which have influenced and guided the course of flute-playing to this day.

We thank them both Liam and Kevin for producing this wonderful music.

2Vincent Woods ‘At home in the music’ 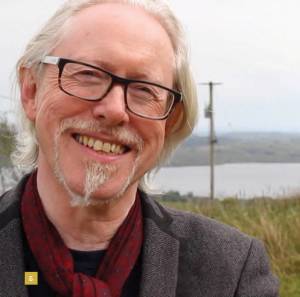 A Saturday in May. I drive up to Tents from the road where, near the site of the old ESB power station, a white owl floated across my car the night before Tommy Gralton’s funeral in March 2009. I pull in on the top road, just before the turn down for John McKenna’s house, to breathe in the air and look at the lake and across to Sliabh an Iarainn – as close to Heaven as it gets, by my book. And there’s the first cuckoo of the year, notes clear as the shining day, sound pulling time in, pausing, and pushing it out again like a bellows blowing the sparks of the first music.

There’s a fire going in the kitchen of McKenna’s house, and the music warms up almost as soon as I step across the threshold. Liam Kelly plays the white and black, pre-Famine flute that found its way from America to here almost by miracle; Kevin Brehony sends piano notes bouncing into the air; the combined sound echoing the early New York recordings of the man who was born here. The acoustic of flag floor, solid stone wall and wooden ceiling make an almost perfect sound chamber, better than any high-tech recording studio, the music rooted and free. Dave Sheridan films and records, Seán Gilrane sits silent and listens: “It’s going great, lads. It’s going great,” And it is. 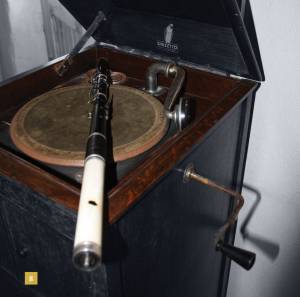 The flute is concert-pitch D, eight-keyed, cocuswood and ivory. It has a scar or two. It’s widely believed that it originates in Litchfield, Connecticut in the 1830s, likely made by local craftsmen as a cheaper copy of the exclusive concert flutes being sold and circulated at the time. It doesn’t have a maker’s stamp (thus avoiding any potential copyright issues) but is no less special for that. We don’t know how the instrument came to McKenna, but it’s believed he played it on at least some of his concert-pitch recordings. McKenna sold the instrument to his friend Joe McAuliffe in New York in the late 1930s and it passed down to his nephew, John McAuliffe, who agreed to send it to the John McKenna Society for the launch of brilliant album and booklet The Music and Life of John McKenna: The Buck from the Mountain in 2014. The flute was in fairly good condition, but a crack in the ivory head joint across the embouchure hole made it unplayable.

It was restored by Hammy Hamilton in Cork (this meticulous work of restoration done as a labour of love, Hammy honoured to give his time and expertise for the cause of music and the circle completed) and played in style at the launch of The Buck. It might have gone back to New York but for an accident of fate

– the tightening up of the international ban on the export of ivory introduced while the flute was in Ireland. If it went back to the U.S. it was in danger of being confiscated and destroyed by customs officials. By grace of foresight and generosity this possibility was avoided, with John McAuliffe opting to donate the flute to the John McKenna Society, and it will remain in Ireland. The only sadness is that John passed away in the summer of 2019, was gone before he could hear this recording by Liam and Kevin; without him, it would never have happened. 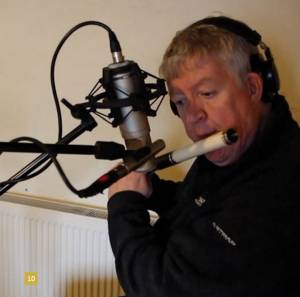 The flute is an object of beauty, but even more than the elegance, the sound is what holds one. It’s sweet and deep and Liam coaxes McKenna’s tunes out like the master he is. And here, home, the music roosts again, within the walls of the house where the older master musician was born on Nollaig na mBán, January 6th, 1880.

Such journeys music makes, and allows us to make. Such journeys musicians make and allow, such connections across time. The history of this flute makes me think of Annie Proulx’s novel Accordion Crimes, which traces the history of a green button accordion over 100 years from Sicily to America and across that vast continent with myriad combinations of violence, inheritance, good and bad luck. I wonder what journeys this singular concert flute made before it reached McKenna, and what journeys it made with him. Proulx stood over near St. Hugh’s well in Ballinaglera, Sliabh an Iarainn in October 2016 and, standing beside her, I pointed across to Tarmon and Arigna, to this place of music.

I close my eyes and listen to the music, remember other sessions here over the years – Mick Moloney, Michael O’Brien and Tommy Guihen playing to awe-struck American visitors who marvel at lough and mountain and the sound bouncing from the small house; Mary McPartlan and Eleanor Shanley singing out the pure drops of old song and new; Garadice and Jesse Smith home from home here –

all echoing the future as well as what already has been. Dermot Fallon and Bríd engrossed in tunes and hospitality. Packie McPartlan standing with me on the street outside the house: “Christ, that’s mighty music”. And it was.

He coped the old roof of McKenna’s house for the first restoration, he told me. He seemed strong as the land itself, invincible almost.

The year I left Tarmon for Dublin, Frank Flynn, Tom Gilmartin, Frank Earley, Ann Duignan, Arthur Boyle and Mary Kate Flynn started the John McKenna Society. I was too caught up in being young and cool to pay too much heed to their work

– although I knew what they were doing was good and admirable. Many others have given generously of their time and support since: Séamus Horan, some of the Harkins, Tommy Gilhooley, Pat and Tina Duignan, Gerry Flynn, John Joe Byrne, Mary Gilhooley. (And forgive me if I omit anyone – we are all so grateful for what you all do.) And what a legacy they have handed down. The memorial to McKenna close to the sports field in Tarmon where he was once snubbed, the annual John McKenna festival in Drumkeeran, the many fine recordings, the elegant simplicity of this house, symbol and living, creative place. They are honoured now in every old tune given new life here. They are honoured in this new rendition of the music, as McKenna and his people are honoured.

One of the tunes Liam plays on the new album is The Kid on the Mountain, the tune that my great friend Pearse Hutchinson adopted as the name of a poem in his 1985 collection Climbing the Light:

What colours can we call them,

the earth and stone that took our eyes in youth, and now comes back with all the pain and beauty of lost youth itself?

I gave Pearse a copy of The Leitrim Cake when it was produced by the John McKenna Society in 2010, and he wrote a poem that appears in his posthumous collection Listening to Bach:

Pipers and a Fiddler

‘I play for the soul, not the feet,’ said the Clare piper Garret Barry.

Willie Clancy said in an interview:

‘The Irish language is the greatest music of all.’

And when there was a piper in the company

Tommy Gralton sparked my own poem McKenna’s   Tunes   with   his    memory of an inglorious sports day in Tarmon when McKenna was hurt by the local discourtesy of not asking him to play a tune when he was there in Keane’s marl field with the need and urge and means to play. An insult softened by Tommy’s request to McKenna to play music for him when they met that evening on the black road. The day saved – or almost saved. So music begets story begets memory begets poetry, then the music comes around again and grows, and grows. 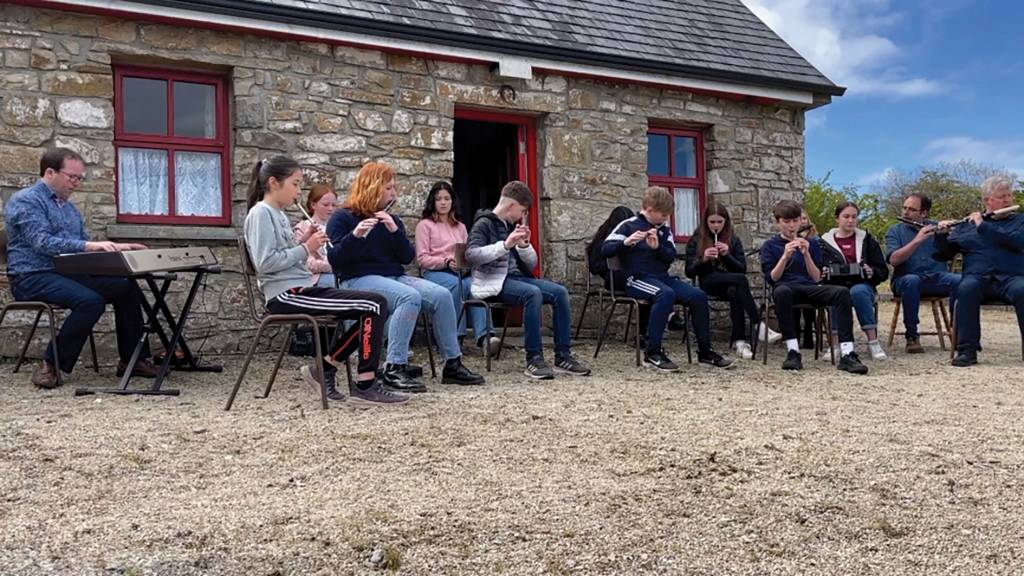 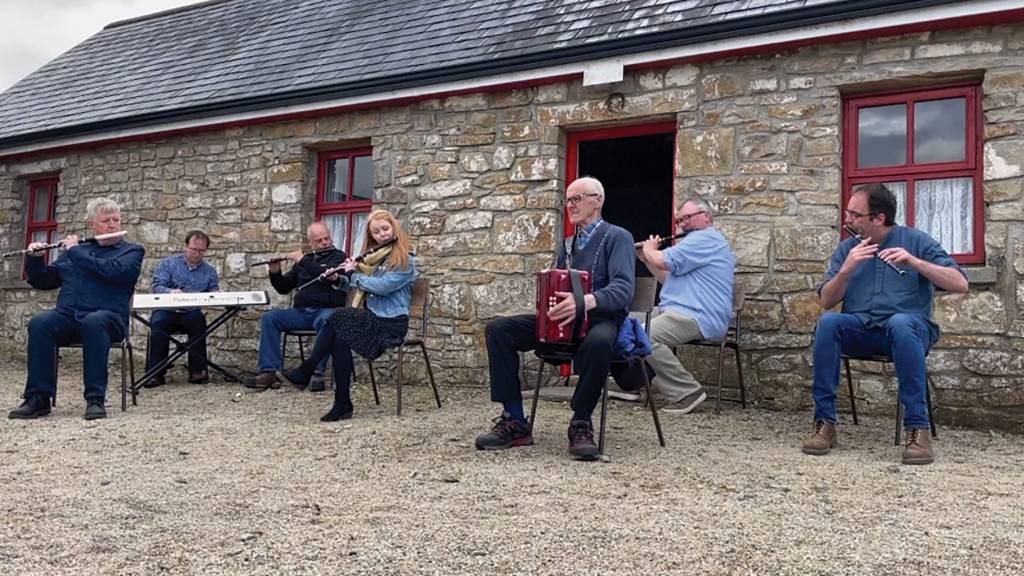